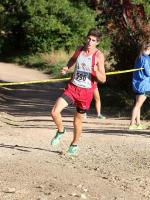 Sort By:
Filter By:

To see all performances, subscribe to start your free seven day trial

What Was Different about May 15?...
Though it didn't break any state meet records, the 3A race between Dominic Carrese and Jake Dunn offered the most stirring finish of the state 800s. Photo by Alan Versaw....

Colorado Track XC 3A Boys All-State 2015...
Roaring Fork's Jose Lopez burst onto the 3A scene in a big way this spring, knocking nearly a full second off his 110 hurdles PR over the course of the season. Photo by Alan Versaw....

Moving Up a Classification? No Problem!...
Matt Hanson's stony determination in Saturday's 110 hurdles finals set the tone for Lutheran's Saturday at state. Photo by Alan Versaw....

800 Records Fall Like Rain...
At the end of the day, Jordyn Colter and Blake Yount had Colorado's high school 800 meters records, but not the same ones they started the day with. Photos by Alan Versaw....

Pueblo Twilight - Under the Lights...
Solana Quistorff pulls away in the rain on the final lap of the Twilight Girls Elite 3200. Photo by Alan Versaw....