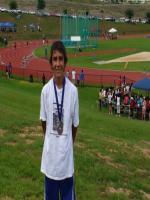 To see all performances, subscribe to start your free seven day trial

1A Track & Field Leaderboard...
The high school track and field season is just heating up, but we thought we&#39;d have a little fun. We know everyone loves some rankings. We decided to break it down by class and see who the leaders...

Area Teams Kickoff Season At Trinity Prep Invitational...
Trinity Prep played host to a half a dozen teams for its annual invitational. This meet marked the started of the 2013 outdoor track and field season for many. The weather was cooperative until the st...

Trinity Prep Standout Daniel Salas Signs With Big Green
Trinity Prep’s Dan Salas has always been an aggressive runner—the key, no doubt, to why he has gotten the most out of his high school running career—and it is probably this drive that led him to...

1A Boys State Meet Preview...
Daniel Salas is a big favorite individually, but his Trinity Prep team will have their hands full with their arch rivals from Holy Trinity yet again....

Ralph's Musings: West Orange Invitational...
Although generally attributed to Horace Greeley, that irrepressible, mid-19th Century editor of the New York Tribune, the phrase “Go West, Ralph,” apparently has not, definitively, been proven as...