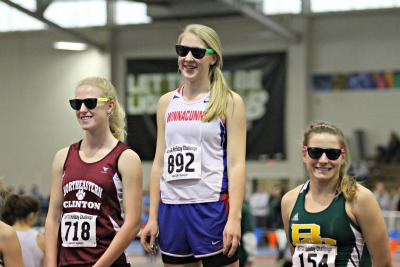 Abby McNulty slowly sipped a cup of water on the Reggie Lewis Center infield. Sweat beaded up on her brow, but her voice was steady with only a small hint of fatigue. It was somewhat surprising that she was five minutes removed from the best performance at yesterday's Holiday Challenge.

Her race wasn’t for the faint of heart. She ripped through the first 800 in 2:33, already well clear of the pack and was clocked at 5:16 for the first mile. McNulty went on to lap the entire field and shattered the meet record with a sterling time of 10 minutes, 44.38 seconds. The mark is the second-fastest this winter to Julie McConville’s 10:27 and put her a whopping 41 seconds in front of runner-up Emily Bryson of North Quincy.

McNulty came into the season wanting to break 10:45. With that goal accomplished, she’s anxious to see how fast she can run in late February. “My goal was to get first place,” she said. “I felt really good today so I just kind of went with it. I felt comfortable. I wanted to go out conservative, but I felt so good I really tried to push it.”

The talented pack left in her wake may not have known it, but it played a big part in the later stages of her record run. “I tried to pick people off when I saw that I was starting to lap them so I could push myself along the way,” she said. “I wanted to break the meet record and break 11 (minutes). That’s what it’s all about, breaking my goals as I go along. I have a strong base from cross country and we’ve just started doing speed workouts.”

Brookline’s Sam Burrington outkicked a solid mile field, winning in 4:29.51. Newton North’s Mike Schichting was second in 4:31.19 and Bishop Guertin’s Griffin Gagnon took third in 4:31.71. Renee Capps of Narragansett set the tone in the girls’ mile, winning her heat handily in a quick 5:12.15, leaving Lowell’s Bryanna Allison alone to capture the seeded race in 5:10.32. Alexa Pelletier of Winncunnett, NH ran a quick 5:13.67 to take third, just ahead of Archbishop Williams’ Sarrah Saccoach who was fourth in 5:13.93.

Amanda Henson simply smiled and shrugged when asked about her aspirations in this season’s state meet. “I want to win,” said the Barnstable sprinter.

Henson got a solid indication that she is on course for a superb season. After a somewhat shaky start, by her standards, in the preliminaries, Henson nailed her start in the final and pulled away from the field to win the 55 dash in a personal best time of 7.26.  Attleboro standout Briana Robitaille was second in 7.33 and Jessica Scott of Hopkinton took third in 7.35.

Henson, who power lifts in the offseason, knows that her start and push at the finish can be improved upon from now until the state meet. And she’s confident that she’ll be drastically improving on last year’s fourth-place state meet finish.

“I’m very happy where I’m at,” she said. “My start was good. I was nervous because it wasn’t great in the preliminaries. I was focused on getting out quick because in past races I’ve had problems when I hadn’t. You know automatically when you get a good start.”

Bishop Guertin’s Molly McCabe blew through the 800 in 2:17 and went on to break the meet record in the 1,000 with a commanding 2:57.22.  The defending New Hampshire state champion in the event believes she could have run faster if she had company up front.

“I was trying to run 2:55,” said McCabe. “That’s what our workouts have been geared to. I usually have a pretty quick finish.”

Ursuline Academy’s Amy Piccolo had a strong stretch run that made the difference, putting her just in front of Shrewsbury’s Domonique Hall. Piccolo clocked 40.79 for the win while Hall checked in at 40.89. Emily Dawidczyk of Oxford was third with her 41.21.

The expected marquee race of the day didn’t disappoint as Methuen’s Mike O’Donnell blazed through the first 400 in 57.9 and bulled his way to a new meet record of 2:29.51. Coming off a 1:55 800 effort last Saturday at Boston University, O’Donnell was the clear favorite against a deep field.

“I knew it was going to be a good field and I wanted to run under 2:30,” said O’Donnell. “I thought they were right behind me.”

Defending state champion Andre Rolim of Somerville never trailed in the 600 and held off a tenacious Korey Hunt of Franklin to win in 1:23.23. Hunt was less than a step back in 1:23.34. Rolim was happy with a tough race so early in the season. “I went as hard as I could when he tried to go past me,” said Rolim.

The shot put turned into a wide-open event with Colin Huey of Lowell taking first with a heave of 53-1-1/2. Newton North’s Carl Whitman had a great 52-8 effort than earned him second and Seekonk’s Nate Robitaille took third in 51-9-1/2.