New Hampshire Cross-Country season is heating up again, with official practices having begun on August 13th. This year looks to be interesting in New Hampshire's Division One; last years division one and all-state champion Bishop Guertin and perennial powerhouses Londonderry and Pinkerton Academy are losing chunks of their team, while up-and-coming teams Winnacunnet and Bedford are looking stronger than ever. Here are the ten teams to watch, in alphabetical order: 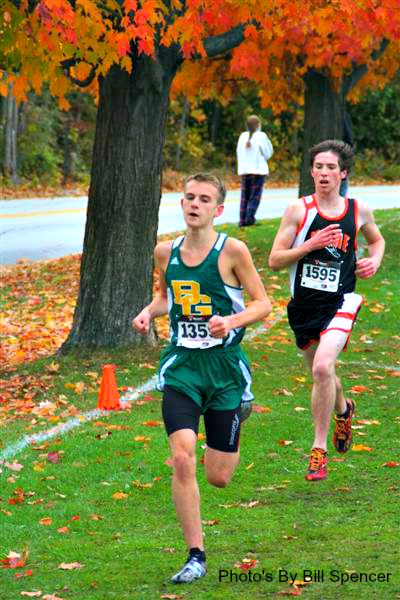 Alvirne finished 12th at last years division one meet, but has much upside going into the 2012 season. Aaron Bellamo, a senior this year, is Alvirne's leader. Last year, he finished 18th in the D-1 meet, and is the third fastest returner overall behind Griffin Gagnon and B.J. Smith. Bellamo ran a 4:24 1600 to cap his junior season last spring, and is prime for a run at the individual title. Alvirne then has Phillip Demers, a to-be sophomore that excelled in the two mile during the spring season and has the potential to go under 17 minutes at Derryfield. They also return Cody Ross, who is the number three junior based off of last years D-1 results. The ability to find a 4 and 5 runner will make or break Alvirnes season.

2012 marks the first year Bedford will be competing in Division One for cross-country. Last year, Bedford qualified for the Meet of Champions out of Division Two with a sixth place finish. Their top returner is Tristam Winship, who ran a 16:57 at Derryfield Park, and should contend for a top 15 finish at the D-1 meet this year. Their top three of last year, which includes Winship, Sam Daly, Scott Daly, all return for the 2012 season, and all three should contend for a top 25 spot at the Division One meet. The 4 and 5 runners look to be Michael Dee and Scott Johnson, the former excelling in the two mile in outdoor track and the latter focusing on the 800. Given the overall depth of the team, Bedford should compete for a top three finish at the Division One meet and a top six finish at the Meet of Champions, a finish which would qualify them for the New England Championships.

Last year, Bishop Guertin went 3-0 in the ever important end-of-season meets. They won the Division One title at Derryfield Park, edging Londonderry by one point. They then proceeded to defeat runner-up Pinkerton Academy by eight points at the Meet of Champions, and were the top New Hampshire team at the New England Cross Country championships, last year held at in North Scituate, Rhode Island.  They graduate four key seniors from that team, including Chris Cogliano, who will be attending Boston College, and Brandon Latham, who will be attending American University. Returning for them, the Cardinals have Griffin Gagnon, who is the top returner from last years D-1 meet, and Robert DeSisto, a junior who is the 17th fastest returner and the number four runner in the junior class based off of last years D-1 meet. Their top 5 will be rounded out by Jonathan Sheehan, a 4:50 miler in the Spring track season last year, Tyler Mclaren, and incoming freshman Christopher Fischer.

800 runners are the make-up of the 2012 Keene cross-country team. Dan Damato is the top returner. He finished 21st at last years D-1 meet with a time of 16:43, and is the 5th fastest returning runner in Division One. As impressive as his cross-country credentials are, Damato made his mark in the 800 in the outdoor track season, having a season best of 1:57. Junior Kody Frye, another sub-2:00 800 runner, will make up the core of the Keene team. Kaleb DeWees, Geoffrey Schillemat, and Dan Rychlik are the three who will likely look to round out the                         top five for Keene.

The Lancers were the deepest team last year in New Hampshire running. Not only did they have the fastest top seven out of all the teams at the D-1 meet last year, they also captured the Junior Varsity Division One state championship. The Londonderry team this year, however, will be a vastly different make-up to last years team: the Lancers graduate their top six runners, and only 7th man Josh Leahy remains from a team that finished an agonizing one point out of first place at the Division One meet. There is good news, however. Londonderry returns two sub-4:40 milers in Leahy and junior Damon Kilgore. They also return last years Junior Varsity state champion, Grant McAuliffe, and have two other sub-17:50 5k runners in Kevin McIntire and Tom Abruzese.

Gone from Central is Dylan Lafond, the most dominant distance runner in the state of New Hampshire last year and last years Individual winner at the D-1 and Meet of Champions meet. He will be attending Mount Olive College in North Carolina. Abram Gagnon hopes to fill the void left by the departure of Centrals top three. Gagnon is the number two returning sophomore in D-1 and ran a 17:10 last year at Derryfield. His two mile time in the outdoor season was a quick 9:55, a time that should solidify him as a contender for top 10 at the D-1 meet. After him, Central has Jamison Couture, who ran 17:32 at the D-1 meet, and Adam LeBow, who ran an 18:40 at Derryfield. Their fifth man could likely be Kenneth Fox, who ran an 18:40 at the J.V. States last year. 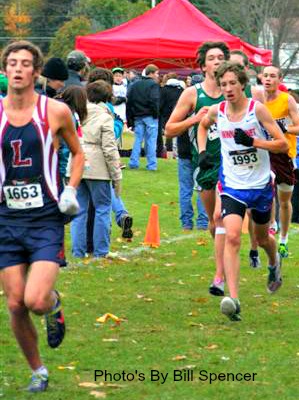 The class of 2013 has been the strongest class Manchester Memorial has had over the years, and this year looks to be the first time the team qualifies for the Meet of Champions. Led by Adam Vargas, who is the number 18 returner in Division One, Memorial has a good amount of depth on their team. Nicolas Mugica, Vargas, and Constantin Routos all ran sub-18:00 last year at Derryfield. They also return Jacob Coutu, one of the states premier 800 runners who went 2:02 last spring season. Their fifth man will likely be Clark Davis, who ran 18:06 last year at the D-1 meet as a freshman.

Devin Motivala is no longer with North, but the team is still a bubble contender for a spot in the Meet of Champions. Despite losing the UVM-bound Motivala, who won the D-1 1600m outdoor title, North returns a very good runner in Craig Hammond. A senior this year, Craig went 16:54 last year at the Meet of Champions and ran a sub-10:00 two mile in the spring. He should contend for a top 5 spot at D-1's. The number 2 runner for North should be Zach Taylor, a to-be senior who ran a 17:15 last year at the D-1 championships. In the 3-4-5 spots for north will be Justin Carter, Jordan Whitman, and Liam Curran.

The Long Red Line graduates two very strong runners in Grant Langevin and Anthony Anzivino, the latter of whom will be attending Dartmouth and the former last years Indoor 1500 state champion. There will be no drop off in talent, however. Chris Poggi and Sean Kopetz are arguably the best 1-2 punch in the state. Poggi went 16:50 last year at the D-1 course, and Kopetz was right behind him with a 16:54. Both should contend for a top ten spot at the D-1 Meet. Poggi is an 800 runner for outdoors (last years D-1 outdoor 800 champion) and should contend for the win on a flatter course, like that for the Meet of Champions meet. Don't be surprised if he has an enormous improvement in time from the D-1 to the Meet of Champions meet. Pinkerton's 3-4-5 runners will be Zach Chabot, Ryan Walsh, and Owen Clark, all three of whom have gone under 17:30 at the 5k distance. This years Pinkerton team could be one of the best they have ever assembled.

This looks to be the year for Winnacunnet. The team they possess this year is their best in the past decade, and they are led by three very strong athletes. Justin Trott is the top returning junior and and the number 4 returner overall. He should contend for a top five finish this year and possibly the win if Concord's B.J. Smith, Alvirne's Bellamo, or BG's Gagnon falter. His time of 16:42 last year was one of the better sophomore times in the past three years. Winnacunnet also has Seamus Cullinane. Being an 800 runner, Cullinane excels on a flat course such as that at Meet of Champions. He should, however, contend for a top ten finish at D-1's. Matt Guerin should also contend for a top ten finish. Guerin ran 16:53 last year, and only improved during the indoor and outdoor seasons. Winnacunnet's 4-5 runners are Bryce Parker and Cameron Dumont. Winncunnet should also contend for a top 2 finish at the Meet of Champions.

Other Runners to Watch: